Trainers are trying to evolve Mantyke in Pokemon BDSP. Mantyke is a water and flying type Pokemon. It has six spawn points, including Sunyshore City, Still-water Cavern, Route 223, Spacious Cave, Riverbank Cave, and Fountain spring Cave. Mantyke is weakest against Electric and Rock-type Pokemon such as Zapdos and Tyranitar. On the other hand, it is strongest against ground and water-type Pokemon such as Groudon and Kyogre. Its best moves in combat include Hydro Pump, Take Down, Bounce, Air Slash, Blizzard, Earthquake, Ice Beam and Surf.

How to Evolve Mantyke to Mantine in Pokemon BDSP

Mantyke can evolve into Mantine if you have Remoraid in your party. Remoraid is also a water-based Pokemon similar to Mantyke. By capturing Remoraid and placing it in your battle lineup, you'll be able to evolve Mantyke into Mantine in no time.

Its best held items include Iron Ball, Lustrous Orb, Mystic Water, Sea Incense, Sky Plate, Sharp Beak, Splash Plate, and Wave Incense. Mantyke tends to like Bitter but not Spicy. It's slow to grow, but it's found alongside the abilities of Swift Swim, Water Absorb, and Water Veil. If your party calls for a water-type Pokemon, Mantyke and its evolution may be perfect for you. If you want to get what BDSP held items, you can come to PKMBuy.com to see. 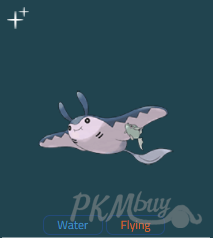 Pokemon evolve in various ways throughout the game. In PKMBuy, you can see a lot of Pokemon evolution guides. Of course, if you want to get the Pokemon you want, you can follow the guide to grab it, or you can buy it directly at PKMBuy.com. You can buy Cheap BDSP Shiny Pokémon here, rest assured and safe. One more piece of good news for you, PKMBuy.com is giving back to its customers for their support with discounts on Shiny Pokemon, Shiny Alpha Pokemon and Legendary Pokemon. Opportunities are not allowed to be missed by you!