PKMBuy - Should You Get Pokémon Scarlet or Violet? What's the difference between the two?

Pokemon Scarlet and Violet is coming soon, and a lot of news about regional variants, new regional details, brand new Pokémon, fusion species, and more is dropping almost daily, keeping fans excited about the upcoming game. Before fans can dive into the Spanish-inspired Paldea region, however, they'll have to make a tough choice between two different versions of the game - Scarlet and Violet.

For most fans of the Pokémon game, this is nothing new, as some variations between the various game versions have been around since the return of the first-gen Pokémon Red and Blue games. However, most of the differences between versions so far have mostly been related to the specific version of the Pokémon and the enemy team, the version-specific Gym first introduced in the previous generation of games. This time, there's not much of an advantage to pre-ordering, but Pokémon Scarlet and Violet do introduce some more differences that may need to be explained. 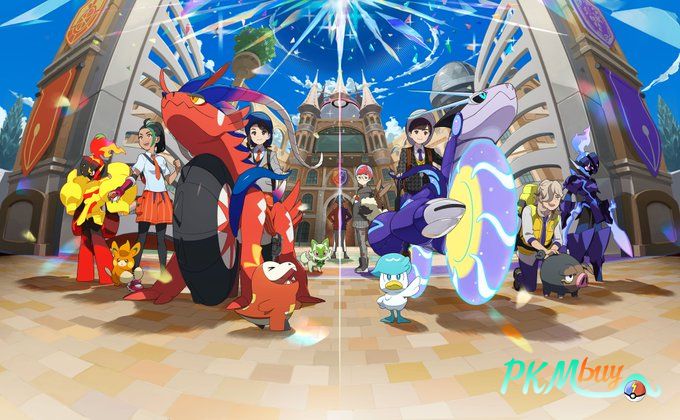 Both Scarlet and Violet have specific versions of Pokémon

As with past games, there are still Pokémon that only appear in one version. While it's unclear how many specific versions of Pokémon there are in total, some of them have been confirmed. Scarlet will allow players to encounter Larvitar's pseudo-legendary line in the game. And the Great Tusk, Armarouge, the legendary Koraidon, and Galar's Stonejourner.

On the other hand, Violet players can encounter Bagon's pseudo-legendary line, Eiscue, Iron Treads, Ceruledge, and Miraidon. If players are collectors looking to fill their Pokédex, this isn't a big deal, as trading is a staple of the Pokémon community, but it's especially important for legendary Pokémon that seem to be encountered earlier in the game than usual.

Scarlet and Violet will have different Pokémon schools and professors

In the game, players will become students of the famous Pokémon School, which welcomes people of all ages. In Scarlet, players will enter the Naranja Academy with an orange color scheme, badges and uniforms. They also meet the female teacher, Professor Sada. In Violet, players will enter the Uva Academy with its purple color scheme, badge and uniform, and they will meet the male Professor Turo. However, keep in mind that if the protagonist's uniform color is a deal breaker, costume customization is back in this game, so there's nothing to worry about.

Time Is Important in Both Games, But It Could Mean Different Things

The biggest difference between the two versions of Pokémon this time is the theme of the game. Pokémon Scarlet seems to be related to the past, with Sada's caveman-inspired costume and Koraidon appearing to be a prehistoric dinosaur-like creature. Both Sada and Koraidon take their names from "pasada" and "korai" - Spanish and Japanese for "past" and "ancient" respectively. By contrast, Pokémon Violet clearly embodies the future, with Turo's futuristic costume and Miraidon looking like a sleek metal lizard. Their names come from "futuro" and "mirai," Spanish and Japanese for "future."

As an extension of this, the various forms in which Koraidon and Miraidon as players use Pokémon as bicycles, water transportation, and flying methods also seem to be inspired by these specific time themes. While it's not entirely clear how significant the past and future are in the actual plot of the game, it's clear that players should keep this in mind when choosing the version they want.

Overall, it's clear that Game Freak's developers have put in more effort than usual to differentiate these two different versions of next-gen Pokémon games. A lot of these differences are aesthetic, or can be easily fixed with trade as usual, but they're still an important area for players to consider when choosing which game to buy. Of course, die-hard fans can always resolve any indecision by purchasing both versions.

Scarlet or Violet? It all depends on your own preferences, no matter what, you can find the Pokemon Scarlet and Violet Shiny you want on pkmbuy.com.