In Pokémon Scarlet and Violet, players take on the role of students at the Paldean School who embark on a treasure hunt research project. Along the way, they'll meet rivals at the gym, team up with a classmate named Arvin to find a rare ingredient called Herba Mystica, and challenge Team Star, a "gang of outlaws."

Gameplay-wise, Scarlet and Violet will feature "Let's Go!" Mechanics that allow players to explore the Paldea region with Pokémon. Players can then send that Pokémon on an independent adventure, picking up items and auto-battles with nearby Pokémon.

Pokémon Scarlet and Violet will be released on Nintendo Switch on November 18th. The latest mainline game will introduce the ninth generation of Pokémon and the new Paldean region. Players will be able to catch brand new Pokémon such as Grafaiai, Fidough, Paldean Wooper (aka Pooper), Cetitan, Cyclizar, Smoliv, Lechonk and Pawmi. These new creatures appear in the series' Pokédex alongside the new starters of Scarlet and Violet, Sprigatito, Fuecoco, and Quaxly, and two new Legendary Pokémon (Koraidon and Miraidon). 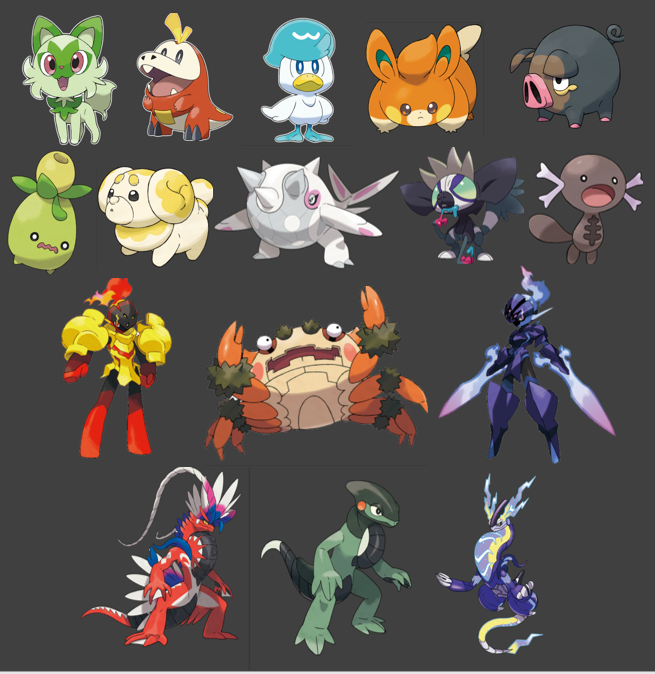 Pokémon Scarlet and Violet are introducing a whole new way to fight other Pokemon without any input from a trainer.

"You can let a Pokémon go out and walk with you on outdoor activities in the Paldea area," the site reads. "When you have a Pokémon exploring the wild with you, you can use 'Let's Go'. ' function to send Pokémon in the direction you specify. Then the Pokémon you send will pick up items in the area independently, and even automatically fight nearby Pokémon."

Autoplay also allows Pokémon to gain experience points, but it's unclear if there's a limit to how long or how many battles it can participate in before requiring another command from the player.

That's not the only news in the new trailer, however, as Nintendo also announced a new limited-edition Pokémon Scarlet and Violet OLED Nintendo Switch console. It also showcases three major stories players can pursue in the new game, taking advantage of the series-first open world.

The information on Pokémon Scarlet and Violet is gradually leaking, and PKMBuy has also been updating relevant information. Pokemon fans can check out the news at pkmbuy.com and more info on Twitter (PKMBuy). If players want to buy Gen VIII Pokemon, they can now. A lot of players like to buy PLA Custom Pokemon. After the release of Scarlet and Violet on November 18th, there will also be such a service. Happy gaming!